Pacific was diagnosed with a genetic disorder called xeroderma pigmentosum, or XP when he was just shy of 6 months old. Pacific must avoid all forms of UV light,, which includes sunlight, even through windows, as well as artificial sources such as unshielded halogen or fluorescent lights. When he was exposed to sunlight, only half an hour of exposure was enough to cause 2nd degree burns over 18% of his body and put him in the hospital for five days.

For Pacific to go outside, he must be covered from head to toe in UV protectant clothing. He wears a hat that has special UV protectant plastic attached to it to shield his face, then the rest of his body is covered with UV-safe fabric, all over a layer of sunscreen.

In typical baby fashion, Pax doesn’t much like wearing his hat, so instead he rides around in style in his custom UV safe stroller. 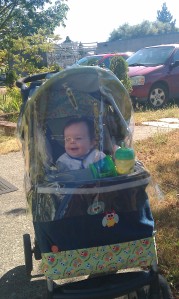 Unlike most people, Pax’s body can’t repair damage done to its DNA by everyday things like UV or cigarette smoke. Any damage that is done is permanent. Over time, he has a more than 10,000 increased risk of some skin cancers because of this. We have to be constantly vigilant to keep his environment safe.